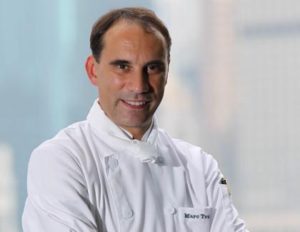 Marc Toutain heads the professional curriculum at IDE, and he is a Master Chef Instructor at IDE in Hong Kong. A member of Disciples Escoffier International, he is also an executive committee member of the “Maitres Cuisiniers de France” (Master Chefs of France) in Asia.

Marc is an accomplished chef, most recently having held Executive Chef positions at landmark establishments in Hong Kong, including Hullett House and the Harbour Grand Kowloon, the flagship hotel operation of the Li Ka-Shing Group.

Early on in his career, Chef Marc initially apprenticed with culinary legends such as Jacky Freon (the Bocuse d’Or winner) at the Lutetia Palace Hotel 5* in Paris. He later moved abroad to work under the tutelage of Olivier Roellinger (3* Michelin) at the Julien restaurant, Meridien Hotel in Boston (ranked among the top-10 hotels in the United States). Marc continued his career at the Meridien group, an endeavor that took him from France to the Middle East. Some of his most memorable experiences included collaborating with Guy Savoy (3* Michelin), Philippe Etchebest (2* Michelin) and others.

Marc has cooked for heads of state and royal families, including former Presidents of the USA, France, Russia, India and the Philippines, as well as movie stars and other international celebrities. He has also been featured on CNN, as well as numerous cooking shows, culinary books, and media articles across Europe and Asia.