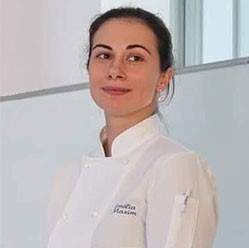 Emilia Maxim is a pastry Master Chef Instructor at IDE Romania. The passion for good taste has always guided Emilia. The first and dearest memories, of course, are those of the tastes and dishes of the grandmother’s, mother’s and aunt’s kitchen: the piece of cake crumbled from Christmas Eve when Grandma was not paying attention, the dangerous and hot attraction of the special praline nuts for the cake. of my mother, the scent of Romanian breadcrumbs with butter and cinnamon of aunts made with plums and apricots made by my aunt…

For Emilia, confectionery was a pleasure and a refuge during the years of university, post-university studies and those spent as a journalist of the Romanian National Television. Only after the passion was accompanied by discipline, rigor, science and sacrifice through study and laboratory work, the confectionery became a vocation.

She took her first steps in the world of “real confectionery” under the guidance of Pastry Chef Mimi Dima, the creative mind behind the Athenee Palace Hilton Bucharest laboratory. Then, her curiosity and desire to learn more turned her gaze to Italy where she discovered the satisfaction of production work in one of the largest and best event halls in the south of the peninsula, with Michelin-starred Chef Paolo Hood.

Her formative journey then continued in a completely different environment, that of the fine dining restaurant with great aspirations as a “sweet part” of the team led by the star Chef Felix Lo Basso. Here, productivity has turned its attention to the finest detail, the complexity and harmony of tastes and textures, the story of the final product and, of course, the refinement of the service. The results were not long in coming, and the restaurant was awarded a Michelin star less than a year after opening.

Out of longing for home and the desire to share the knowledge she gained, she returned to Bucharest where, together with her partner, she set up a special consulting company for the HoReCa environment. The company’s activity includes collaborations with restaurants, producers and public institutions, such as the Italian Embassy and the Italian Cultural Institute in Bucharest.

Last but not least, out of love for the confectionery and hope for its future in Romania, Pastry Chef Emilia Maxim dedicated herself to training the next generation of professionals in the field.