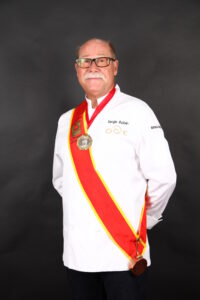 Serge Robin is the Director of Education and Development for IDE Europe & North Africa.

Originally from Mont de Marsan, he was full of energy from an early age. His father, a policeman, and his mother, a housewife, soon realized that his energy needed to be channeled and suggested that he did some ‘little internships’ at the Hôtel du Commerce in a restaurant in Roquefort des Landes during the summer holidays. From the age of 13 to 16 he spent most of his time in the kitchen and it was there that he caught the cooking bug. He announced to his Father ”I want to be a chef…. but of the kitchen!”

In 1971 he went to Cap-Breton [the famous Alain Ducasse was his desk-mate] where he passed his CAP ‘Cuisine Classique’ with distinction. His teachers sensed his potential and suggested that he continued his studies at the Lycée Hôtelier de Grenoble [same time as Michel Troisgros] where he also excelled and passed his BTH with distinction in 1975. With this experience he decided to continue to study for a BTS.

When he graduated in 1977, he joined the Palais de la Méditerranée. In 1978 he was called up for military service and his father’s legacy led him to the Gendarmerie at the officer’s school in Saumur, to which he remained bound all his life and ended his military career as a Reservist Commander.

In 1979 he returned to the civilian life as a chef. In 1980 on the advice of the famous Alex Bort, he decided to become a “culinary teacher”. He started his career as an assistant teacher in Menton. Very quickly he climbed the ladder, culinary professor level 1 in 1982; head of hospitality works in 1984; professor level 2 in 1987; executive chef of the Olympic Games in Barcelona in 1992; certified Professor in 1994; and from 1999 to 2017, certified professor in Culinary Engineering and Hotel Engineering. During his career, he was one of the key persons who created the ‘Bac Pro Cuisine’ and the ‘Bachelor of Culinary Art’.

Mr. Robin joined the Institut Disciples Escoffier in 2013 and was one of the driving forces behind the creation of the IDE programs. Today he is the Director of Education and Development for Europe & North Africa.