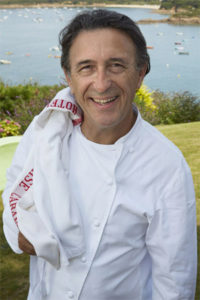 Patrick Jeffroy expressed early on his taste for the diverse and unusual products, introducing algae in these recipes, while he was in the kitchens of the Hotel de l’Europe in Morlaix. He then escaped to Nice to train at the famed Negresco. Patrick Jeffroy’s talent was recognized by a Michelin star in 1984.

He then left for Paris, at the Archestrale, in the brigade of Alain Senderens, before settling in 1988 in Plounérin in Côtes d’Armor. The success was immediate, followed by a Michelin star.